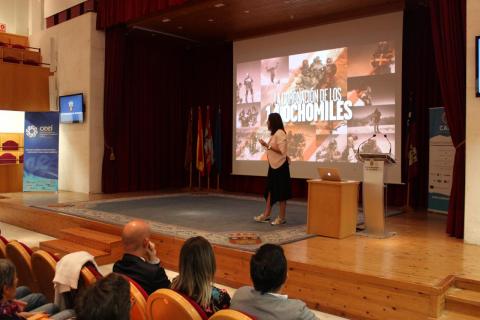 The event, is an initiative of the CEEI Burgos since the first edition, but this time has been carried out together with the University of Burgos, UBU.

During the morning we called the event as Venture Academy aimed at sustainable tourism. The event opened by Levy Moreno, Councilor for Tourism of the City of Burgos and President of CEEI Burgos, began with the presentation of Joantxo Llantada who gave a vision of the changes that are going to come in tourism and the keys for successful overcoming.

Next, Víctor Badorrey, director of Institutional Relations in Segitur spoke of intelligent tourist destinations to end with a debate in which Burgos tourism companies participated: Paleorama, Aquotic, Vozz, Dettur and Burgos Travel.

Afterwards, all those attending the event were invited to participate in the challenge of proposing ideas that improve tourism in the city of Burgos.

On the other hand, the afternoon of the V meeting was opened with a brief presentation of the European CAST project, in which the CEEI Burgos is currently working on and which has the aim of promoting companies in the tourism sector.

Then, under the title "Expedition to success" took place the presentation of Edurne Pasaban, known for being the first woman in the world to climb the 14 mountains with eight thousand metres in the world. She tried to motivate and encourage the speakers in the field of entrepreneurship, setting her personal experience as an example. In this way, she showed how you can set yourself challenges and objectives that must be achieved to succeed, as well as overcoming the difficulties that can be encountered along the way.

One more year, the assistance has been a success with around 170 attenders in total of both events, something that we would like to thank and we hope that both events have helped personally and professionally, as well as awaking the enterprising genes.