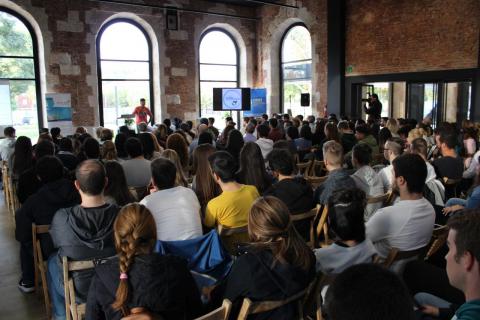 Around 6p.m. the event began in one of the spaces of the building enabled for the occasion by the hand of José Vicente Orden (director of CEEI); who after welcoming the attendees presented the facilities offered by the CEEI to the entrepreneurs.

Then intervened, Aitor Francesena "Gallo". For about an hour, Aitor recounted a summary of his personal life since he was a very young boy dedicated to the world of skateboarding and specially to surfing in various competitions. It was this great hobby that led him to become interested in making surfboards as he was telling us, even creating his own workshop where he experimented with the most optimal fabrication. In addition, as he showed us later, this passion led him to be one of the founders of the country's first surf school and become coach of elite surfers like Aritz Aranburu or Eneko Acero. Currently, despite losing his vision, he continues surfing, working on what he has been passionate about for a couple of years, author of books such as "Las Olas Contadas". In this way he showed us a clear example of personal and business success.

Subsequently, a roundtable took place where local entrepreneurs presented their business cases, work of the company or products and services they offer. Among the entrepreneurs, we counted on:

In this way, attendees had the opportunity to be directly interested in questions to entrepreneurs on specific issues such as difficulties encountered in starting up companies, supports or existing aids, positive points to lead to out your business ideas, etc.

In addition to this fantastic day, some days before the event was also held in "La Estación" the II Venture Academy where training workshops were developed of a practical nature that addressed topics of interest to entrepreneurs: